Life of an outside country cat is usually short and not often noticed. It is born. It dies. Everything else about its life is conjecture, pieced together when one cat catches the imagination of a neighborhood. That is what happened to the cat someone named Wally.

A neighbor tells of nursing a white cat with ginger colored markings but she hadn’t seen it for awhile.

It showed up on our farm, probably because I feed the feral cats.

Well, Wally wasn’t always present at feeding time came and went when he wanted. I’d see him in the ditches, looking for food in the fields and the hill beyond the barn. Winter time we’d see more of him, food was consistent, and the south facing parts of the barn warm. But come breeding time, he was always around, many of the new batches of kittens were mirror images of him.

Often I saw the healing gouges of fights, but he healed. Not today.

Wally hadn’t been around the place for a week, on Saturday he showed up covered in dried up blood, facial gouges. Tried to clean him up, give him food and water–he wasn’t accepting the care. He crawled away when we weren’t looking. We searched but couldn’t find him. We searched on Sunday. On Monday, the postman delivered a package and said there was an injured cat on our sidewalk. Somehow Wally had crawled to the house.

He was rough looking. Did he come to the house looking for help or a place to die? His breathing was normal. I decided that if Wally could make it to the house I had to give him a chance to live or relieve his suffering and pain.

Called a neighbor who is a vet, she wasn’t available. Called the vet in town, he got us in.

The cat stank, there were maggots in a few wounds and when the vet opened Wally’s mouth, half the palate was torn away. It was a quick and easy decision the euthanize Wally. The end came swift. His pain and suffering was ended.

The vet’s conjecture was that Wally had tangled with a coyote. Mine is that this big tom cat fought hard for his life and was able to crawl away. He crawled to us for help, we gave it. May he Rest In Peace.

In the forty plus years we’ve been farming, we haven’t seen a year like this before.

In our area, the harvest season started late due to lots of rain– 2-3 weeks late. The sun didn’t shine much and the ground held the moisture making for sections of fields that were left to be harvested at a later date–when the ground froze. Some farmers are still waiting for this to happen; on the way to Beaver Dam this week, I saw corn still standing.

Another common problem was standability, some corn varieties didn’t come up to snuff this year. We anticipate that there will be wind, that there will be rain, one of the traits in a corn variety we look for is that it will still be standing so we can harvest it. This year some of the corn fell all over the place making harvest a bear. The stress level skyrocketed this year. I wonder how many farmers swore during harvest that this would be their last year?

But the corn and soybeans got harvested, and the sun is shining and farming looks inviting–except for the prices. And next year might be better.

Last night it snowed. I like this, it seems to quiet the world. Preparation for this season has ended…unless you farm.

There is corn and soybeans to be combined. Due to the wet fall, the harvest got started late and we ran into the winter season. And for farmers of a certain age, the specter of the 1985-86 winter is visible.

That winter the snow came and stayed. Lots of corn went unpicked. If we don’t get our crops, everything else comes to a standstill. Because we can’t deliver our grain, we don’t get paid. And it cascades from there.

I remember the anxiety of that year. I remember when spring came that in some fields I picked corn by hand; we needed to combine the fields with larger stands.

We remember the anxiety, the depression, but also joke about the year we harvested our crops twice.

The sun is out now, light is bouncing everywhere, the snow is sparkling, the wind is blowing the snow from the spruces. And it has covered the leaves I haven’t raked.

Yesterday I would have said that this fall was reminding me of this spring’s weather–rain interrupted by a few days of good weather.The crops got planted in spurts. It looks like the crops will get harvested the same way. With this morning’s snow, I’m thinking that it reminds me more of the winter of 1985-86. That year the snow came , then kept piling up. We finished harvesting in the spring.

So, with snow on the corn, we will wait until it melts off before finishing the harvest. It may be that we will finish in December–haven’t done that in a while.

This spring we planted about two hundred acres of corn, then the rains came. They went away for a day, day and a half, not enough for the ground to dry out. We started using the childhood chant of “rain, rain go away, come again some other day”–it didn’t work. For almost three weeks the rain spigot was not turned off. It reminded us of 1974.

Then the rain stopped. The ground dried. And it became a dash to get the rest of the corn and soybeans planted. We did it with help from a brother-in-law, many thanks to him.

Then the rain didn’t come. And the ground continued to dry, creating a crust that the shoots might not break through. We waited, and waited. Finally, the rains came again.

We’re hoping that this isn’t a repeat of 1974–there was an early frost that year.

With farming, if it isn’t one thing, it’s another.

Walked into one of the cornfields on July 4th, the corn was chest high–what a relief. The old rule of thumb is if corn is knee high by the fourth of July, you’ll get a crop. Great, a little less stress because the spring planting didn’t look so hot. But the crop isn’t made or out of the field. We have to worry about: late summer hail storms and wind, an early frost, a wet fall, an early snow. But one more milestone in growing a crop has been met.

As we drive around looking at crops, wheat fields are looking good. Which means we can expect some storms. Seems when the wheat is ready, the wind, rain, and hail come too.

But for now, we can enjoy these summer days and nights–enjoying the firefly displays. Hope you are enjoying summer.

For being optimists, farmers worry a whole bunch: is it too early to plant, will there be a freeze, will the crops survive an early freeze, is the ground too dry, is it too wet, when will it stop raining, when will it start raining, why haven’t they delivered the seed, why haven’t they delivered the fertilizer, what the hell is the market reacting to…it goes on until the crops have been harvested and sold. Then comes the new year, and the worries start all over again.

There was a freeze in mid-May, about the time we can expect the last freeze of spring. Here is what a corn plant looks like with frost damage. Notice the brown edge on the leaf.

The next photo is of corn plants just emerging. This is the first time we farmers give a sigh of relief, the seed is growing. 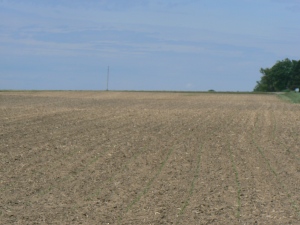 The next photo usually brings the next sigh of relief, it looks like a green haze over the field. A miracle, the crop is really growing.

From here until the harvest is complete, we will be walking the fields to monitor the progress of the crops. Why all this work? We enjoy the work…mostly.

We went for a walk last  week, it was warm, and there wasn’t any snow on the road. The Canada geese were honking and flying north, we heard Sandhill cranes calling from the marsh–spring is almost here. But winter isn’t over, yet– this week proved that. Most of us in the area still talk of blizzards in the middle of March and April, snow in May, and the dreaded ice storms of February and March that we have experienced.

The first year I lived on the farm there was an ice storm. For three plus days we didn’t have electricity, something we usually take for granted. Without it the well pump couldn’t run, we didn’t have drinking water, bath water or water to flush the toilet. Luckily the farm came with an outhouse.  For light we used candles and oil lamps. What an introduction to farm living!

But there were some good things that came from that storm: my husband had the outside electrical lines buried, we no longer worried about live wires during a storm, and I always prepare to hunker down when a storm is forecast.

We prepare for what we can during late winter storms, and then hope that spring is really around the corner as we listen to the winds howling around the house.

Every farming season has its challenges, this year it is corn harvest.

In July straight line winds swept through the Columbus area. The wind goose necked the corn.  The pictures below show what this corn looks like. The much of the corn crew at an angle making it hard to see the rows during combining, and, in some fields, combining it in one direction. This has added more days to the combine season than anticipated. 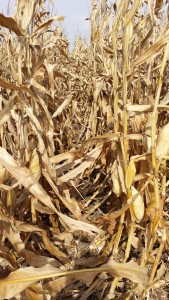 Below is a picture of what a corn field should look like. The rows of corn are defined.

I’m hoping that the good weather we’ve had so far lasts a while longer– until after the harvest is finished.

On our farm, soybean harvest was finished about ten days ago. I am grateful we got them in before the first hard frost.
Now, one thing has nothing to do with the other, except that a hard first is usually a harbinger of winter. And you can’t combine soybeans in the snow.

There is a narrow window to harvest soybeans on a daily timeline and a seasonal one. Soybeans are sensitive to moisture, that means if there is dew or frost in the morning, we have to wait for the moisture to evaporate. And, as I said, you can’t combine soybeans in the snow, there is too much moisture, and the snow, that might be on the plants and ground, could get into the combine clogging it up. (I’ve learned some new phrases when that happened.) So, I am grateful we are done with that part of the harvest is done and we are onto the next crop. And that is another story.